Hello our valued visitor, We present you the best web solutions and high quality graphic designs with a lot of features. just login to your account and enjoy ...

Hello our valued visitor, We present you the best web solutions and high quality graphic designs with a lot of features. just login to your account and enjoy ...

Gloves-off, hands-on conversations with some of the world’s best musicians. The podcast captures the essence of Latin music culture and the stories behind the music. Hosted by Joey De Leon and Jhair Sala, with guests such as Peter Michael Escovedo, Damon Grant, Ron Powell, and more. 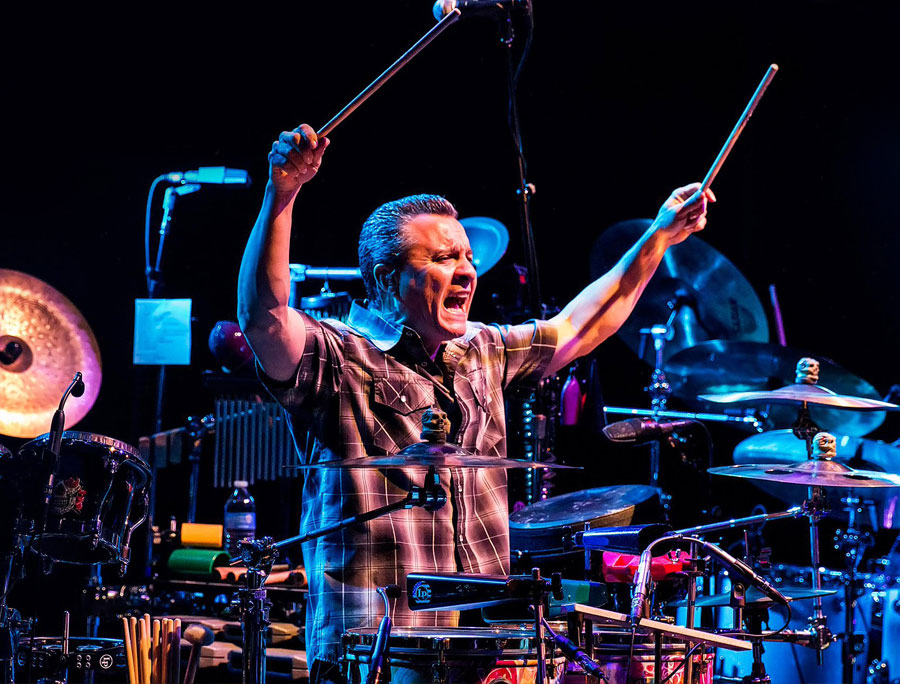 In this episode, Joey sits down with musician Karl Perazzo. Born and raised in San Francisco, Perazzo has long toured with Santana and has appeared on several of Carlos’ albums. He has also recorded and played with Malo, Dizzy Gillespie, Pete and Coke Escovedo, Prince, Mariah Carey and John Lee Hooker, as well as Latino greats Tito Puente and Ruben Blades. With LP, he created the LP Karl Perazzo Signature Series Timbales.

In this final show of 2019, we’ve pulled the top 10 episodes together to showcase some of the artists we’ve featured this year.

Joey meets up with Hector in LA, on day four of a sold out 7-night run of shows at the Forum. Hector is a percussionist and multi-instrumentalist from Sonora who has been playing with Mexican pop rock group Mana for 13 years.

In this episode, Joey sits down with the legendary John "Dandy" Rodriguez in the LP Drum Workshop. John began his career at age 17 playing bongos in the Tito Puente Orchaestra. He and Joey cover some of the highlights of his long career, the different styles that he plays, and what's really behind his nickname "Dandy".

Joey's guest this episode is LP's own Josh Trask, the production manager at the LP Woodshop. Josh tells Joey about the process of crafting the cajon, the different voices that wood can have, and what it takes to get the right tone. He also previews what products are coming next.

Joey de Leon sits down with Jason Aldean drummer Rich Redmond to talk about his versatile career, what keeps him going through the ups and downs of the industry, and what he does to grow creatively (like take a comedy class).

In this episode, drummer, composer, and educator Michael Napolitano joins Jhair to talk about the importance of teaching music to children, their shared love of Italy, and Michael's new record ""Seeing Life in 20/20"". And, Jhair puts a twist on his standard closing question - who's in Michael's fantasy band?

Michael Napolitano started his musical lifestyle at an early age of 3 when placed lovingly behind his father’s drum set. The son of a touring musician, a huge influence on Michael’s path came from his roots. From his years as a musician performing and touring with various artists to his 10 years with Blue Man Group, and now with 8 years behind him with his own award winning Rockness Music, Michael has developed a unique style influenced by his own family and life experiences and of course his deep love for music. With the creation and release of Michael and the Rockness Monsters, the father of two begins the next step of his impressive musical career.

In this episode, Jhair sits down with Joe Bergamini, drummer, educator, author, and publisher. Born and bred in NJ, Joe tells Jhair about his early days playing along to Rush and Van Halen, his successful career as a progressive rock drummer, why it's important to learn the business side of music, and the truth about rudiments. Jhair learns that Buddy Rich couldn't read music and helps Joe name his fantasy band.

Most well-known for his original progressive rock playing, Joe is the drummer in the bands 4Front and Happy the Man. He also works extensively on Broadway, on shows such as Movin’ Out, Jersey Boys, The Lion King, Rock of Ages, In the Heights, and Million Dollar Quartet. Joe is the author of six popular drum books, Senior Drum Editor for Hudson Music, co-owner (with Dom Famularo) of Wizdom Media LLC, and an internationally recognized drum clinician and educator.

In this episode, Joey welcomes Frank Zummo, drummer for pop punk band Sum 41 and founder of the drum ensemble Street Drum Corps. Frank tells Joey about seeing his first concert at age 5, why learning to play music outside of his comfort zone is job security, and meeting Tommy Lee for the first time (which eventually led to a fill in gig with Motley Crue). Sum 41's latest album Order in Decline was released in July.

Jhair sits down with renowned drummer and percussionist Yayo Serka, fresh off a tour throughout Spain with Lila Downs. Yayo shares his experiences as a musician, from learning how to play at a young age in Chile, to the years he spent in Cuba and more.

In this episode, Jhair Sala sits down with Brookyln-born world percussionist Bashiri Johnson about imposter syndrome, recording the music of Ray Charles, and what instrument speaks to him the most.

This week, a special episode was recorded at the LP HQ in Oxnard, CA. Joey's guest is Kiran Gandhi, an electronic music artist, drummer, producer, and activist. Kiran Gandhi is known by her stage name Madame Gandhi and is one of the most important and impressive up-and-coming young artists. Having gained recognition as the former drummer for M.I.A. and Kehlani, Madame Gandhi now writes music that elevates and celebrates the female voice.

This week, We Are Rhythm features percussionist Paoli Mejias in conversatoin with host Joey De Leon. Paoli is a distinguished master percussionist and Latin Grammy award nominee, who is ranked among the best in Latin jazz and salsa.

In episode 11, renowned percussionist and composer Doug Hinrichs visits Jhair’s studio to talk about his diverse musical career, from his early days learning music in Nebraska to playing on Broadway, to traveling to Brazil to learn different styles of Brazilian music. Doug explains how he came up with the one handed triangle, they discuss the virtues of prog rock, and Doug shares who's in his dream band (they even give the band a name).

This week on We Are Rhythm, Joey sits down with world percussionist Kassandra Kocoshis. They talk about her musical family and early beginnings as a musician, discovering flamenco, and how her impresssive career has evolved with each city and musical act she’s performed with.

Aaron Serfaty is a renowned drummer, percussionist, and educator at USC. He sits down with host Joey DeLeon to chat about his career that started at an early age, coming to the United States to learn swing, taking a teaching gig to provide for his family and why you should train your students to be better than you.

Sheila Escovedo, better known as Sheila E., is percussionist, drummer, multi-instrumentalist, composer, producer and singer. She sits down with Joey De Leon to talk about growing up in her famously talented family, being self-taught, and that time she met Prince, who’d already had an eye on her skills. (and the rest is history)

Ron Powell is a percussionist, musician, author, and instructor. Ron sits down with Joey De Leon to discuss his career with Kenny G., Diana Ross, Sergio Mendes, and that one week he was offered 5 gigs at once.

Percussionist & musician Damon Grant joins host Jhair Sala in his Rahway, NJ studio, to talk about learning how to play drums in middle school, the rigor required to be in drum corps, and the choice he had to make between baseball and music.

Host Joey De Leon is joined by Emmy- nominated musical director, producer, singer, and multi-instrumentalist Peter Michael Escovedo. Joey and Peter Michael talk about his famous family, his early days growing up in the Bay Area and why that part of the country was the perfect place to get a well rounded musical education. He talks about the latin jazz rock band that used to play in the family living room with his dad (Terry Bozio on drums, Neal Schon on guitar, and an occasional appearance by Carlos Santana), watching Marvin Gaye improv in front of a live audience while they were on tour, and why he’s always studying the position ahead of him.

The latest episode a family affair as host Joey DeLeon is joined by Father and son percussionists, Michael and Remi Spiro who discuss their unique perspective on exploring their passion for percussion from the outside in.

On the latest episode of the "We Are Rhythm" podcast, our host Joey Deleon and Brazilian-born percussionist Felipe Fraga chat about "kitchen table" percussion, baseball, Chicago-style hotdogs, learning to play the pandeiro from a trombone player and Fraga's evolution from classical percussion purist to Brazilian Popular Music afficionado.#WeAreRhythm

Host Joey Deleon talks to multi-faceted producer, writer, percussionist and drumset player, Trevor Lawrence Jr., (aka TrevBeats) about his passion for making music and working with some of the biggest names in the industry including Dr. Dre, Mariah Carey, Lionel Richie, Macy Gray, Eminem, The Temptations and Herbie Hancock among others.

For our first-ever "We Are Rhythm" podcast, our host Joey DeLeon is joined by Bronx-born conguero, Eddie Montalvo. As real deal as it gets, Montalvo recalls the early days of his career where he found himself, "Coming out of a club at four o'clock in the morning and by seven o'clock..? I'm working in a manhole in New York City." From the streets of NYC in the 1970's to working with legendary artists like Ruben Blades, Willie Colon, The New York Philharmonic and Celia Cruz among others -- Eddie Montalvo is Rhythm.